Kids pick up on your energy and the energy in the home more than anything else.  They absorb it, and in time, this energy becomes ingrained into their being. Your words become their inner voice. They carry their early years and you forever in them.

I was 17 when my first son was born. I didn’t want to be responsible and nor did I want to be permanently tied to a demanding living, breathing human being. I resented him for keeping me at home whilst my peers got on with their lives. I resented him for being the reason I had to give up my Saturday job at the stables that I loved.  I loved horses more than human beings and I had to give horses up because of this little human being who demanded all of me.

For the first two years of his life, I did a half-assed job. My mum helped me greatly, so finding the time to study wasn’t really a problem. The problem was my life. Suddenly, I was tied down. I had responsibilities. I was no longer free to fly. My options were cut down. I had to put him first.

My mum’s cajoling smile never faltered. “This is the greatest job you’ll ever do,” she said with total conviction. “All that you need to be happy is here, Jac.”

Gah! She went on and on like a broken record. Her unwavering conviction slowly tore down my wall of disappointment and resentment. I began to realise, actually, I was  doing OK despite my restrictions.  And really, those restrictions stop becoming restrictions when I built my life around them. I am a mother, and I have a different life than my unencumbered peers who would go on to do great things. But do this parenting job right, and the prize is I will always have this loveliness to come home to.

But the two years have affected my son. His closeness is not with me though I have tried building bridges. Though he was less than two when I was struggling to sort myself out, he carried my resentment in him – the times I turned away from him in annoyance, the times I pointedly did not want him and the times I wasn’t there when he took his first step, cut his first tooth, and said mama. The scary thing was, I was there physically, but emotionally I wasn’t. I was away with the fairies in my head, building my dreams, wanting to fly.

Four years after his birth, my second son was born into an altogether different set-up. This time, I was ready. I was fully present. I was fully aware of wha that was required of me. Basically, I realised that I can’t do a half-assed job. There is no magic wand to make all the deficits balance at the end of the day – something had to give. Because there was no magic hats that I can pull extra resourcesout of to make everything balance. And even if I close my eyes tightly and pray, I still cannot be the top student with a great career and a proper mum. There just wasn’t enough of me to serve two masters.

And so with a heavy heart, I trudged to the building in Oxford Street, Manchester, for my Anatomy exam. If I had failed – totally expected – I would have gone home to my backwater hometown and worked at Pullinger’s in Bishops Waltham. I passed my first year Anatomy by 1% but I had crossed an important line in my life: I knew I would give all up gladly for my little family.

For the past 10 years, as soon as I could afford not to be the main breadwinner, I have more or less been a stay-at-home mum who worked when my children could release me from my duties. I spent a lot of time dedicating myself to them instead of my job, cooking wholesome meals and tutoring them whilst my peers stormed ahead in their careers. It was difficult to stand on the sidelines sometimes.  Everybody seemed to be making their mark in the world, doing great things, whilst I who had so much opportunities and education, was a nobody, except in my children’s eyes.

“So-and-so is a Professor now,” my father would tell me. “And she was never as intelligent or as gifted as you.”

Or “Did you read about So-and-so in the Financial Times? Amazing achievement, what!”

Whilst I had been muddling along, making green smoothies, tutoring my reluctant offspring, attending every football match and opened doors with a big smile when they came home from school. Not much to shout about, compared with the achievements of others, who started off with less than I.

A few years ago, I bumped into a former lecturer of mine.

Yes, I was the one who won that coveted scholarship to Oxford in my third year, destined for great things.

But thankfully, I had a mum who made me see early on that I did not “sacrifice” a career or an exciting life for my family, but rather, they are my career and my life.  Seeing my youngest child’s unbridled  happiness captured in her megawatt smile smile – she of eternal sunshine – reaffirms that belief every time, for what could be worth more than this? 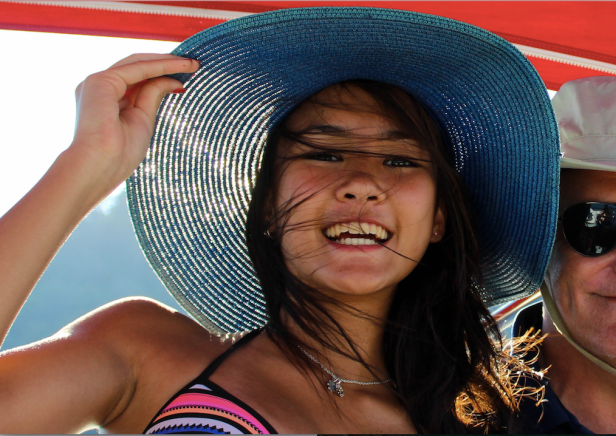