Yesterday’s homily at the midday mass at Westminster Cathedral was delivered by Fr John of Mill Hill Missionaries.

In 1987, Fr John was stationed in a remote outpost in Uganda, arguably one of the most dangerous places in the world for a pale tubby man amidst the conflict. One day, when he was driving home to the mission, he was stopped by several soldiers at a roadblock.

The soldier pointed a rifle at him and demanded that he got out of the car.

The soldier wanted to see what’s in the boot of the car. Fr John opened the boot and revealed his groceries, which was luxuries such as sausages. His nervousness increased when the soldier asked him to tip the contents out of the shopping bags.

The soldier then picked up the Bible and looked through it. Fr John said his nervousness shot up sky-high.

And then the soldier looked at him and said, “Father, this is the real food.”

Almost too often, we focus on feeding our bodies but not our inner beings: we strive to eat good food, because we have seen what bad food can do to our bodies. We have also seen how food can heal physical ailments.

Yet we fail to make the connection between the discontent, anxiousness, latent anger, unhappiness we feel with the hunger of our inner beings or being fed the wrong sort of food.

It’s not just the bible that can feed your inner being – even the bible says that – but a commitment to something beyond the immediacy of your everyday life. You need to get altitude to have latitude, namely to step out of the busy-ness of your narrow world to see the bigger picture.

You could feed your inner being with a myriad of beautiful food. The four that come immediately to my mind are meditation, nature, selfless love (e.g. commitment to a charity), spiritual texts. Not just once a week or during public holidays, but everyday, even if it’s just for 9 minutes. It is the miles of an meaningful journey traversed that feeds the inner self, each mile filling a little bit more of the gaping hunger.

And once that sharp edge of this hunger is blunted, you will feel a grounding, a bliss and gain a gentler perspective of life. It may even cure your chronic ailments too, since mind and body are so intimately intertwined, as various medical research has shown.

If you are a parent, feed your child not only via his stomach but his mind, his heart and his soul. Cherish him, love him so fiercely, make him feel safe, show him an abundance of kindness and slowly, gently lead him inwards to find his own peace.

It’s not about the school a child goes to or the house he lives in, but the home he builds within himself for himself and his future family….don’t leave his inner being in poverty.

This is my food today: houseboat on the Thames in South Quay, Canary Wharf, and sun rising over London Bridge on my way to my morning yoga class. That is my commitment ❤ 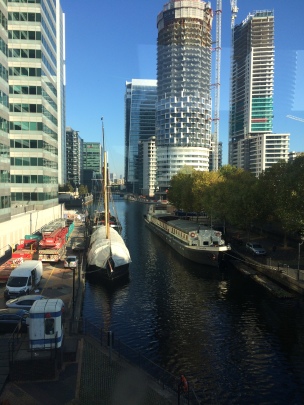 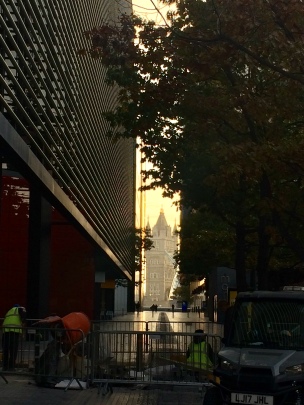 2 thoughts on “Wisdom from a Ugandan soldier”