My daughter recently finished a topic on chemical bonding in school.  It was a relatively simple topic and I was shocked that she did badly in the test, given that she aces all her other subjects effortlessly.

“What’s the topic about then?” I asked.

Technically, there are four types of chemical bonds in the International Baccalaureate Diploma’s chemistry syllabus. The first type is ionic bonding, where atoms donate and receive elections to each other, and are then bound by the resultant positive/negative electrostatic attractions. The second type is the covalent bonds, where atoms share their electrons in order to bond to each other to become more stable molecules. The third is metallic bonds, where the positive nuclei group together to share their electrons communally and are held tightly in place by this sea of delocalised electrons. The fourth and final type is intermolecular bonds between atoms and molecules.

So what’s the problem? I realised that her understanding does not extend beyond the paragraph above and she is woefully clueless about how it all works beyond what she read in her textbook. It prompted me to write to her school, the President of the Royal Society of Chemistry UK and Times Education Supplement.

We should educate young people to make the connections between dry textbooks and the vibrant universe that they live in. It takes passion on the part of the teacher to bring knowledge to life and that is what that makes a difference between a young adult who becomes an inspired learner or those going through the motions simply to pass exams.

As a parent I do not think I can subcontract my children’s education entirely to professionals, despite their slew of Bachelor of Education degrees. It is far too important, because education is not merely a means of achieving paper qualifications but all about learning to live fulfilled, meaningful lives.  I do have a son who is not a university graduate but he has been very well-educated because he has been blessed with people in his life – teachers included – who lit the spark in him rather than killed the flame off.

So, one day on the beach for a lesson on chemical bonds with my daughter who dislikes chemistry.

“What has it got to do with IB chemistry?” She asked.

She did not know about silica, SiO2, which is the component of sand in many parts of the world; quartz broken down by the sun, sea and wind, into tiny granules between our toes.  These tiny granules of sand share the same chemical bonding as diamonds.

We talked about making diamonds. Crunching saloon cars on a jar of peanut butter to get the pressure, I said. I’d rather have the peanut butter.

The conversation moved on naturally to ozone, the Jekyll and Hyde molecule of our world. We talked about the chemistry of free radicals – “Complicated equations,” she said – to ozone destruction, greenhouse gases (we haven’t heard about that for a long time), global warming and pollution.

“Do you know how CFC works?” I asked.

“Couples For Christ,” she grinned.

A light is switched on somewhere in her brain, a little spark, and I know she will revisit this topic with new eyes and an open heart. 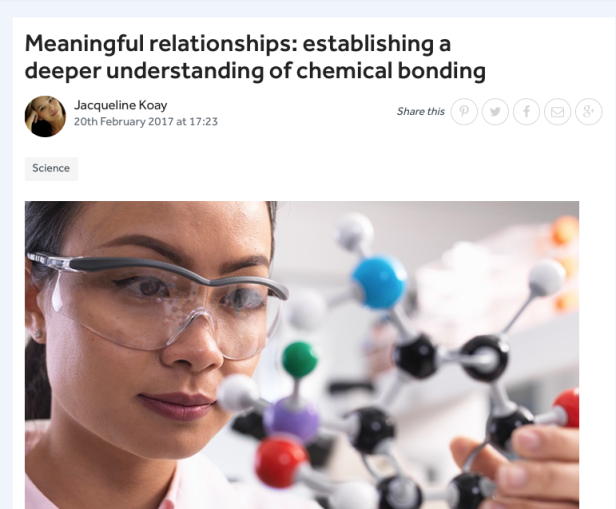 My article for Times Education Supplement can be accessed here.