I love the fact that in Phuket, where I live for part of the year, people are so relaxed (rather than uptight, defensive or apologetic) about religion.  On this island, it is kind of like a melting pot of everything and you get the real meaning cooking in the mix.

A few days ago, I wrote about “Buddha” buying me a drink. I found a THB20 note in the gutter outside my house and I gave it to the motorbike taxi guy who is always waiting around for customers rain or shine. And less than 200 yards later, I found another THB20 note! My Thai yoga friends told me not to give the second THB20 away, because maybe Buddha was trying to buy me a drink (post here).

Today I decided to claim my Buddha drink.  I stopped at this lovely lady’s stall at the foot of my hill. 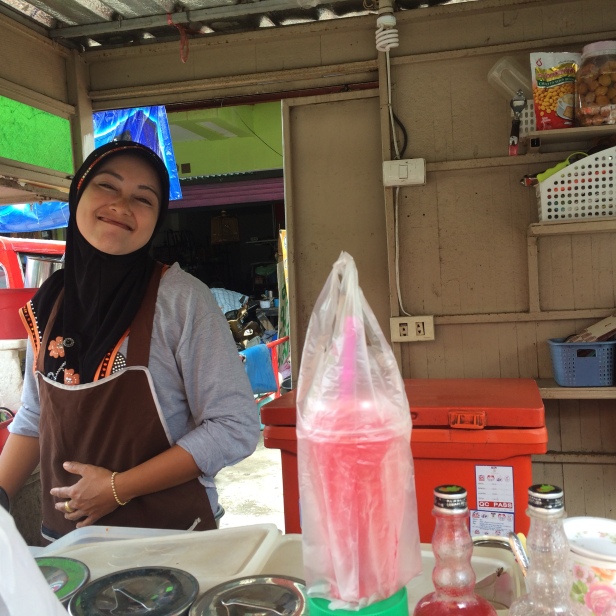 “Can you give me something for THB20?” I asked, and told her the story.

She thought for a moment and said, “I give you red soda water.  Good for hot day and when I drink this, I feel happy.”

Ugh, I thought, full of sugar, artificial colouring and E-numbers. But hey, relax ya? (as my partner would say). It’s hardly going to kill me, right? I should stop being so uptight.

I thanked her and gave her the THB20.

She laughed and pointed at the crucifix encircling my neck. “Buddha give Christian lady money. Christian lady give Muslim money,” she said, pointing to herself. “Muslim take money and give Buddhist monk later. Finish story, ok!”

I love her simple wisdom!  Isn’t this what life is supposed to be about, this sweet simplicity ?  ❤