Three years ago, my son bought a small house in a very modest neighbourhood half an hour from my parents’ house. As he was only 26 at that time, that was the best he could afford, despite a 50% loan from us.

It’s a starter home, I told myself.  He will sell it soon and move to a more salubrious neighborhood, closer to home.

But the three years had opened my eyes. The neighbours, especially.  I can often hear the happy sounds of children playing in the backyard. The neighbours knew my son is away a lot, serving in the Royal Navy, and though his house is crammed with up-to-date surveillance equipment (our family joke is his surveillance equipment costs more than the house), they keep an eye on his house for him. Olivia, who is in her seventies, has a key to his house, and she would come in and make sure everything is fine. She takes the rubbish out for him, imagine that!

The main photo shows the  peach tree in his backyard.  The garden is only tiny, but it has received much love, given the realities. When we came back early in summer, the peaches were just appearing on the tree. We tied transparent plastic bags to stop the birds attacking the fruits, and here they are today, ripe and sweet. 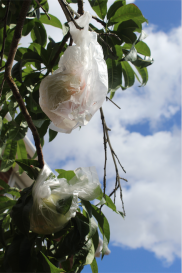 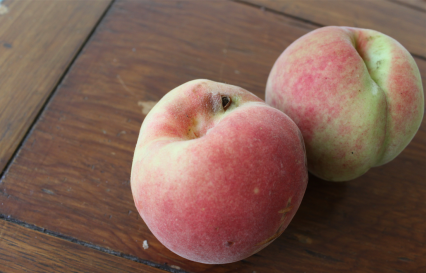 I guess the simple truth is that we don’t need expensive houses or expensive schools to raise lovely adults, just love and a whole village.

Because some of the people who do the worst damage to others and behave in the most disgusting manner come from expensive houses and universities.